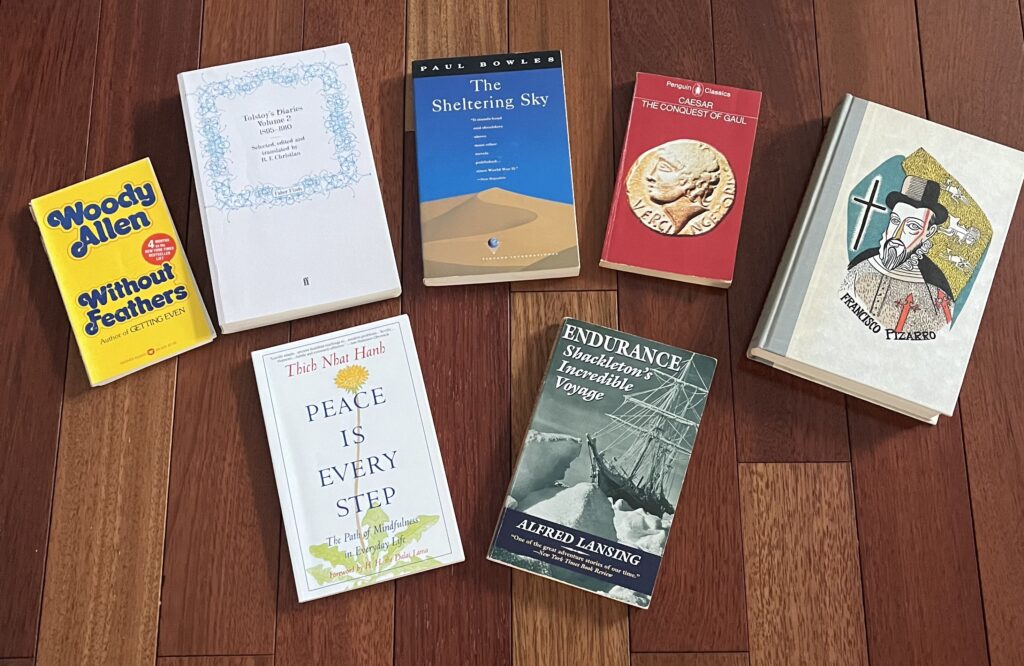 After writing my short review of an 18-year-old ER episode I couldn’t forget,  I started thinking about books I’ve read over the years that similarly stuck in my mind. I came up with 33 of them. This is by no means a comprehensive list of great books, but they are all illuminating, relevant, and entertaining in the extreme, if not in equal proportions. I hope you pick up one or two and enjoy them as much as I did.

1. A Calendar of Wisdom, written and edited by Leo Tolstoy. Philosophy, theology. Pithy and profound reflections on life, courtesy of the world’s greatest thinkers. An excellent book to keep on your nightstand. Buy it.

2. Against All Hope: A Memoir of Life in Castro’s Gulag, by Armando Valladares. Autobiography. You think communism is cool? Read this and report back. Buy it.

3. Andersonville, by MacKinlay Kantor. Historical fiction. A grim, highly detailed account of hell on earth, one that happened to be right here in the U.S.A not all that long ago. Andersonville was a Union POW camp during the Civil War. Buy it.

4. Bubba Ho-Tep, by Joe R. Lansdale. Fiction. (SPOILERS FOLLOW.) An aging Elvis Presley is stuck in a remote Texas nursing home under attack from a soul-sucking Egyptian mummy — your typical Hallmark movie plot. Adapted into a great movie starring one of my favorite actors, Bruce Campbell. Buy it.

5. Endurance, Shakleton’s Incredible Voyage, by Alfred Lansing.  History. Ernest Shackleton’s failed attempt to  cross Antarctica on foot became even more historic than that accomplishment would have been, as the voyage became of necessity one of the most amazing survival stories in the recorded history of man. Makes you appreciate just how tough we humans can be. Buy it.

6. Eugenics and Other Evils: An Argument Against the Scientifically Organized State, by G.K. Chesterton. Essay. Pretty timely title, eh? As usual Chesterton is more relevant today than he was 100 years ago. Yeah, science … I think not. Buy it.

7. I, Claudius, by Robert Graves. Historical fiction. So real, so convincing, it’s like you’re there, rubbing elbows with Augustus, Livia, Tiberius, Caligula, Nero,  and all the other folks who to a high degree shaped (and warped) Western civilization. Buy it.

8. Interview with the Vampire, by Anne Rice. Fiction. What a storyteller Anne Rice is. Through every syllable, you’re as mesmerized as the fictional reporter who listens to the vampire’s tale. Buy it.

9. Memoirs of Sergeant Bourgogne, by Adrien Bourgogne. Autobiography.  As told by one of the few survivors, a common soldier’s uncommon account of Napoleon’s horrific retreat from Moscow under the worst possible conditions. It’s a survival story comparable to Shackleton’s, but on a more sweeping scale. Buy it.

10. Mozart’s Letters, Mozart’s Life, Edited and Translated by Robert Spaethling. History. Mozart was not the man usually portrayed in film and fiction. He was much deeper, and much, more relatable than you might imagine. Buy it.

11. Ogilvy on Advertising, by David Ogilvy. Autobiography. Everything you want to know about advertising, business leadership, and business ethics is neatly bundled up in an entertaining package. Buy it.

12. Orthodoxy, by G.K. Chesterton. Religion. This book has possibly brought more modern skeptics  into the Catholic Church than any other work of apologetics — including me! Every word rings true. Buy it. Or, buy the new American “translation.”

13. Peace Is Every Step, by Thich Nhat Hanh. Philosophy, religion. A how-to manual for relieving stress, enjoying life, and making every moment count — needless to say, much needed guidance in our world of mile-a-minute distraction and social-media-induced tension. Buy it.

14. Peter the Great: His Life and World, by Robert K. Massie. History. Why was Peter great? Read this and find out. It’ll also give you a fuller understanding of what makes Russia tick today. Buy it.

15. Plutarch’s Lives. History. A big, tough read, but not read enough. If you’re critical of Western culture, or want to better defend it, this book is must reading, a series of biographies of Greek and Roman military and political leaders. It’s vast in verbiage, but each profile is full of thrills and unforgettable characters. Buy it.

16. Salammbo, by Gustave Flaubert. Historical fiction. A deeply textured, ultra vivid, and haunting account of the last days of ancient Carthage. Carthage was much like our culture today, and we are headed in the same direction. Buy it.

17. Sister Carrie, by Theodore Dreiser. Fiction. A gritty, deeply depressing account of urban life in the late 1800s in America. Hurstwood’s fall is uncomfortably true to life. Buy it.

18. The Confessions, by St. Augustine. Autobiography, history, theology. In the opposite vein of Sister Carrie, the  brilliant but admittedly sinful Church Father describes his spiritual ascent from sin and despair to holiness and joy. Aside from his intellect, St. Augustine was just an ordinary guy in many respects. If he could make the ascent, you can, too! Buy it.

19. The Conquest of Gaul, by Gaius Julius Caesar. Autobiography, history. The conquering hero himself describes one of history’s most pivotal conquests. Caesar was as powerful and effective a writer as he was a leader — depressingly revealing how truly inept and corrupt today’s leaders are. Buy it.

20. The Everlasting Man, by G.K. Chesterton. Religion. A powerful companion to Orthodoxy. Again, every word rings true, dispelling a myriad of myths and prejudices about Christianity. Buy it.

21. The History of the Conquest of Peru, by William H. Prescott. History. An edge-of-your-seat account of one of the most improbable conquests of all time, a handful of Conquistadors toppling the mighty Incan Empire. Vivid and dramatic beyond belief — all the more amazing considering the author was blind. Think what you want about Pizarro — the fact this actually happened is so astounding, it’s almost impossible to believe. Buy it.

22. The Mind of the Maker, by Dorothy L. Sayers. Religion. If you’ve ever wondered how God thinks, Dorothy Sayers offers answers dripping with common sense and plausibility. Simply written but deceptively deep, the book serves as a reliable guide to morality, ethics, and faith. Buy it.

23. The Nazi Doctors, by Robert Jay Lifton. History. We throw the word “nazi” around like confetti these days. Before sticking that label on somebody, read this and see if that somebody fits that abominable bill. I doubt it. Buy it.

24. The New Man, by Thomas Merton. Religion. The deep spiritual reflections of one of the most spiritual Christians of modern times. Feeling lost? Adrift?  Buy it.

25. The Popes Against Modern Errors: 16 Papal Documents, Edited by Anthony J. Mioni. Religion, history. This collection of documents blasted all of my misconceptions about Catholicism and Christianity. These popes were smart, perceptive, ahead of their time, and demonstrated themselves through these documents to be reliable and brave spiritual leaders in a world tipping toward ruin on many levels. All the insights in this book are valid and relevant today. Don’t rely on what people say about the Church and about the popes. Read what the popes have to say for themselves. Buy it.

26. The Sadness of Christ, by St. Thomas More. Religion. Thomas More’s spiritual reflections as he awaited execution for staying true to his faith. So sad, yet so uplifting. You want to know what genuine spiritual strength looks like? Here it is. Buy it.

27. The Seven Storey Mountain, by Thomas Merton. Autobiography. Merton’s account of his transformation from skeptical urban aesthete to Trappist monk. Fascinating. Buy it.

28. The Sheltering Sky, by Paul Bowles. Fiction. Paul Bowles had a unique voice and wrote several rather exotic novels describing the corruption and despair of modern man. This is my favorite, although Let It Come Down is right up there. Buy it.

29. The Stranger, by Albert Camus. Fiction. For my money, Camus’ finest existential exploration. Although The Fall is a close second.  Buy it.

30. The Year’s Best Science Fiction, First Annual Collection, Edited by Gardner Dozois. Science fiction. Dozois passed away recently; he edited this series for more than 25 years. The first collection is the strongest sci-fi anthology I’ve ever read, hands down. Hard copies are rare, but it’s now thankfully available as a download. Incidentally, my review of this book on Amazon was more fun than anything I’ve ever written. Buy it.

31. Tolstoy’s Diaries, Volume 2, Selected, edited and translated by R. F. Christian. Provides crucial insights about the complex character and views of the great thinker, and  thought-provoking theological and philosophical observations too numerous to count. Buy it.

33. Without Feathers, by Woody Allen. Fiction, humor. Sort of the opposite of Tolstoy, this early book by Woody Allen reveals his truly brilliant, absurdist sense of humor. Good Lord, he can be so funny. Buy it.