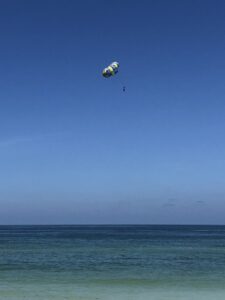 My wife and I were having lunch on the patio of our favorite tiki bar.  A glorious day in the Sunshine State. St. Patrick’s Day, too.

The table on the left could best be described as morose. A lot of slow, deliberate eating and not much in the way of conversation. In particular, there was a women wearing a perpetual scowl, a very severe scowl. She was good at scowling, perhaps a Rhodes Scowler. I don’t like to judge; maybe something was going on to dampen their spirits. But the more I watched, the more it seemed this was just the way they were.

The table on the right was very jolly. People coming and going, laughing, sampling each other’s food. In particular, there was this old gentleman who looked to be in his late 70s or early 80s. He had sharp, gleaming blue eyes and a big, perpetual grin — the biggest, happiest grin you’ve ever seen. He was wearing a t-shirt with a beach scene on the back that said: THIS IS PARADISE. To top things off, he wore a glittering, green leprechaun’s hat secured by an elastic string under his neck.

At first I thought he was drunk or something, but the more I watched him, the more it seemed like he was just happy. He exuded happy. And then it struck me. I haven’t seen that much happy in a long time.

Seems like ever since COVID started, the whole world has been like the table on the left. Grim. Isolated. Lonely. Sad.

It doesn’t have to be that way.

One Reply to “A Tale of Two Tables”