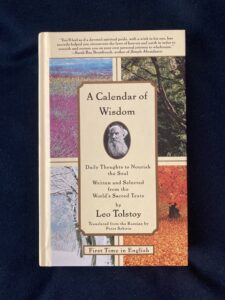 Tolstoy’s last major work was A Calendar of Wisdom, Daily Thoughts to Nourish the Soul. He wrote many of the sayings, and included or adapted those of many others. Often cited names include Marcus Aurelius, Cicero, Confucius,  Emerson, Goethe, Kant, Lao-Tzu, Blaise Pascal, Rousseau, John Ruskin, Seneca, Thoreau —along with frequent passages from the Talmud and Bible.

If you want spiritual nourishment and enlightenment in small, easy-to-digest servings, this book is for you.

Tolstoy’s wisdom is pretty much the opposite of everything today’s popular culture teaches, making it indispensable for anyone in search of a happier, fuller, and more meaningful life.

This book will challenge you, It will force you to think. It will make you better.

“Improve your own soul, and be  confident that only in so doing can you contribute to the improvement of the larger society of which you are a part.” (January 17)

“A distinctive feature of a thinking person is submission to his fate, as opposed to the shameful struggle with it that is a characteristic feature of animals.” – Marcus Aurelius (February 4)

“In order to change the nature of things, either within yourself or in others, one should change, not the events, but those thought which created those events.” (February 5)

“Those who live according to the will of God cannot be sensitive to the judgment of other people.” (March 20)

“A person’s unfriendly attitude to other people makes life unhappy; both for that person and for those who surround him. A friendly mood and loving attitude are as an oil which lubricates the wheels of life, making them move easily and smoothly.” (April 4)

“People involve themselves in countless activities which they consider to be important, but they forget about the one activity which is more important and necessary than any other, and which includes all other things: the improvement of their soul.” (April 6)

“If you can see all of the consequences of your actions, then your actions are of no use.” (April 15)

“If you live with another person, make an agreement that as soon as either of you starts to blame the other, you will end the argument.” (April 27)

“He who sees his life as a process of spiritual perfection does not fear external events.” (May 1)

“If a person has problems, there can be only one root cause: lack of faith. The same is true within human societies as a whole.” (May 16)

“The more respect that different objects, customs, or laws are given, the more attentively you have to question the right of these things to have this respect.” (June 4)

“When you suffer, think not on how you can escape suffering, but concentrate your efforts on what kind of inner moral and spiritual perfection this suffering requires.” (June 21)

“The very shortcomings which make others difficult and unbearable mean less in yourself. You do not see them, and when you speak of other people having the drawbacks, you do not notice that you are describing yourself.” – Jean de la Bruyere (June 25)

“The more people believe that others can improve their lives, the slower any improvement will occur.” (June 30)

“In the world today, real faith has in most cases been replaced by public opinion. People do not believe in God, but they believe in many minor things which are taught by other people.” (July 10)

“The major reason for the evil that exists today is the absence of faith in people of our time.” (July 10)

“It is dangerous to see the cause of evil as lying outside ourselves; for them repentance becomes impossible.” – Frederick William Robertson (July 28)

“For the most part, false and harmful opinions are distributed and supported by influence. We are too likely to accept the views and thoughts of other people without trying to investigate them deeper and further ourselves. Unimportant people are those who accept other people’s thoughts without developing them themselves.” (August 5)

“You should not be upset by the sight of wisdom being criticized. Wisdom would not be real wisdom if it did not reveal the stupidity of a bad life, and people would not be people if they endured this revelation without criticism.” (August 13)

“Salvation lies not in rituals and not in a particular creed, but in a clear understanding of the meaning of your life.” (September 11)

“The more upset a person is with other people, and with circumstances, and the more satisfied he is with himself, the further he is from wisdom.” (September 13)

“The exposure of a lie is as valuable to a community as a clearly expressed truth.” (September 15)

“Nothing can enlighten people’s lives and ease their burdens more than the understanding that they should serve God.” (September 19)

“Knowledge is limitless, and the most scholarly and educated person is as far from true knowledge as an uneducated peasant.” – John Ruskin (September 23)

“We are not satisfied with our real life. We want to live an imaginary life, a life in which we seem different in the eyes of other people than we are in reality.” – Blaise Pascal (November 2)

“It is only faith which creates the powerful convictions, the energy, and the unity which can cure society,” – Giuseppe Mazzini (November 16)

“The virtue of a person is measured not by his outstanding efforts, but by his everyday behavior.” – Blaise Pascal (November 21)

“It is difficult to bring people to goodness with lessons but it is easy to do so by example.” – Lucius Annaeus Seneca (November 26)

“Your enemies can be more useful to you than your friends, because your friends can often pardon your weaknesses, but your enemies notice them and attract your attention to them. Do not neglect the opinion of your enemies.” (November 29)

“Those who give second place to God in their hearts do not give Him a place at all.” – John Ruskin (December 13)

“No person is without sin; no person is completely truthful. It is not that one person is virtuous and truthful and another is sinful and deceitful; rather it’s that one person strives to move toward truth and virtue and the other does not.” (December 15)

“Civilization is first of all a moral thing. Without truth, respect for duty, love of neighbor, virtue, everything else is destroyed. The morality of a society is alone the basis of civilization.” – Henri Amiel (December 22)