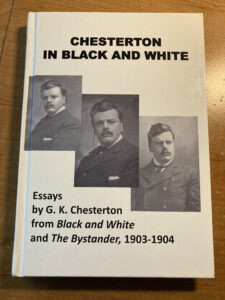 A collection of Chesterton essays was published July of 2021: Chesterton in Black and White, Essays by G.K. Chesterton from Black and White and The Bystander, 1903-1904, edited by Geir Hasnes. These early essays, with a few exceptions, have never before been reprinted — a real treat for longtime Chesterton fans, as well as a fine introduction to Chesterton’s non-fictional work. Some excerpts:

“It is a total error to suppose that the possession of convictions — of hard, strong, unquenchable convictions — makes a man bigoted. It is quite the other way. The most bigoted people in the world are the people who have not got any convictions at all.” (That Bigoted People Have No Beliefs) He proceeds to explain this seemingly paradoxical statement, quite convincingly.

“The great majority of grown-up people in any age will be in all probability slightly insane; for since no human philosophy is perfect, and since every human philosophy naturally treats itself as if it were perfect, the chances are that in every generation that the majority of educated people will be ecstatically certain of something that is quite untrue.” (An Example of the Truth of Fairy Tales)

This passage from Is Credulity Ignorant? fascinated me because in it Chesterton reveals what motivates him as a writer: “The wildest credulity must stop somewhere. But I would like to say a few words about this matter to show that my remarks were not quite so much beside the point as they may have appeared, to vindicate my relevancy, that virtue on which I particularly rely as smoothing my path to Heaven.”

“I can tell Mr. Blatchford of an institution many times older than Christianity, many more reeking with blood and shame. Ordinary human government has been from the beginning of the world a thing more dreadful than the Inquisition. Torments that are nameless, bestial punishments have been the characteristic of every code of law that has ever been.” (The Joys of the Incredulous)

“The actor is older than the audience. And it is, in consequence, a very terrible and alarming sign if large masses of mankind wish to be audiences. It might cause a temporary complication if they all wanted to be actors, but it would be a far more reassuring indication as to the health of human society.” (The Decline of the Amateur Actor)

“The new fashion in Western Europe and America is a fashion of a certain professional benevolence of the upper and middle classes towards the poor. There has arisen to rule the world, lifted upon the shields of the Fabian Society, the Expert, the last and worst of the oppressors of mankind, and the rise of the Expert means the decline of the citizen. That is, it means the decline of the amateur politician.” (The Decline of the Amateur Politician) Dr. Fauci, are you listening?

“The smaller the city, the larger the citizen.” (The Decline of the Amateur Soldiers)

“At present it is machinery that is working us. I never can see a man turning a handle for a few minutes without being filled with a strange conviction that the handle is turning the man’s arm.” (The War of the Children)

“We use only half our wits when we make our life civilized and sensible and commodious and scientific and never ask ourselves at all whether we are making it free and self-dependent and beautiful and brave.” (The Disappearance of the Sword)