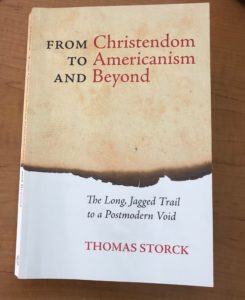 Thomas Storck writes with great clarity, and is able to make extremely complicated topics understandable to the average reader. In his collection of essays, From Christendom to Americanism and Beyond, he takes on one of the most complicated topics imaginable, the centuries-long (and still unfolding) disintegration of Western civilization, or as he puts it in the book’s subtitle, “The Long, Jagged Trail to a Postmodern Void.”

If you feel as though the world is in disarray, that everyone has anger but no one has answers, and that we face an extremely uncertain if not terrifying future, then this book will definitely give you perspective and understanding, but unfortunately not much in the way of reassurance or hope. Nevertheless, it is preferable to have a clear idea of what is going on rather than live with false hope or in a fog.  And perhaps one of the biggest obstacles for putting things back on the right track is exactly that: too many people not knowing how we arrived at the place we’re in and how much has been lost along the way.

Christendom describes the cultural framework that existed during the Middle Ages, primarily in Europe, when the Christianity and the Church dominated all facets of society. A chief benefit of Christendom Storck stresses is its unity: political, economic and social activity all pointed in the same direction, toward God. And while there was certainly an abundance of sin and error, the supreme question was always the same: Does this or that action or idea glorify God?  Material wealth was not an end in itself, nor was political power, nor was personal “happiness,” whatever that is. Instead, financial profits were good to the extent they provided for physical and spiritual needs; political power was wielded to the extent that it improved the welfare of those subject to that power; social decisions were good insofar as they promoted and facilitated personal and social morality.

Fast forward to now. Economic, political and social activities are disconnected, operating within their own spheres of influence. In economics, materialism drives production and consumption, without much regard for whether a particular manufactured item is necessary or desirable as a practical matter, let alone whether it contributes or detracts from the salvation of souls. In politics, as we are seeing in the clearest way over the last few election cycles how power is sought and wielded for power’s sake; political positions are taken sincerely or insincerely as circumstances dictate, without much regard for their rightness or wrongness. In social matters, we are on the verge of a hot war pitting “the left” against “the right” — but even here, our moral positions are thought of as primarily individual choices and come in as many packages as there are people on the planet. On this note, Storck makes an excellent point about how our culture has substituted the word “values” for “virtue.” “Virtue” implies an objective rightness or wrongness to an action or set of beliefs, whereas “values” implies no objective standard whatever. “Values” are a reflection of a culture of isolated individuals, whereas “virtue” was a unified standard that brought individuals together, at least in principle, during the reign of Christendom.  Our journey from community to isolation is no accident, as Storck observes:

“… the modern Western world is built on principles that deny or reject the possibility or desirability of community as the foundation for social life. The men of the eighteenth century who more or less created the modern social order did so in conscious rejection of the social community that had been built, imperfectly it is true, by Catholic civilization over many centuries.” (Chapter 6, “The Social Order as Community”)

The long road from there to here is a story of philosophical fragmentation. When the philosophers of the (so-called) Enlightenment began to substitute the wisdom of man for the wisdom of God, no idea, no moral principle, was sacred. Over time, competing views of economic, political and social ideals solidified into comprehensive philosophical systems (or straightjackets) — marxism, capitalism, fascism, psychoanalysis, etc. Each of these systems contains just enough truth to have credibility and attract adherents, but not enough truth to be a solid basis upon which human communities can thrive.

Storck does a fine job of pointing out the flaws in all of these philosophical systems, sometimes hitting very close to home,  questioning core values near and dear to many Americans. For instance, one flaw he concentrates on is the notion of materialism, so fundamental to American economic and social life. He notes that if it is true, as the Bible tells us, that if love of money is the root of many evils, then how can it be good to base an entire economic system on just that thing? But we have been conditioned by centuries of thought to believe that individual, corporate and national success are best measured in dollars and cents, glossing over the obvious fact that a person with the most possessions does not necessarily possess the richest soul, the company with the fattest profits doesn’t necessarily make it the best steward for the market or the environment, and the nation with the highest gross national product doesn’t necessarily have the most spiritually advanced citizenry.

On a related theme, Storck takes issue with idea woven into the very fabric of our Constitution — the idea that government is a necessary evil. In Christendom, government was considered a necessity and a greatly desirable one at that.  It was clearly understood that  humans are by nature social beings and as such require a political organization to actively ensure that human needs are met — and not at the expense of our obligations to be good stewards of the earth. To strive for an “every man for himself” social structure is to invite chaos and suffering, to enable the most ruthless and corrupted among us to acquire the greatest influence and power.

A centuries-long conflict of ideas is one thing, but a denial of ideas is even more destructive. At this point in our long and painful journey down the rabbit hole of rationalism, Storck takes note of exactly this development, the growth of a “post-modern” attitude that rejects rational argument altogether, that places no value in ideas, much less in the exchange of ideas. Instead,

“Texts are no longer arguments made to convince someone of some point of view; for, as we saw, post-modernism suspects every such argument to be a covert attempt to grab power. Instead, an argument is play; argument becomes trivial. Although modernism very often espoused error and made wrong arguments, it was very much, indeed passionately, interested in truth whereas post-modernism is not interested in making an argument. Rather it seeks to destroy every argument, even the possibility of argument.” (Chapter 13, “Post-Modernism and the End of an Age”)

The author does see something of a silver lining, in that a reaction against modernism at least creates the possibility of people questioning assumptions so deeply ingrained by centuries of modernist culture that it has never occurred to us to examine them. Indeed, many of the current day reactions against capitalism, communism and every other “ism” are not something new, but are grounded in ideas that are very, very old, ideas that were merely common sense thinking in the Middle Ages. While Storck is not tremendously optimistic about a return to a modern version of the philosophical unity and clarity that characterized Christendom, it will definitely help the cause if people read his book and others like it, and learn about a past they never knew existed.

4 Replies to “Book Review – From Christendom to Americanism and Beyond, by Thomas Storck”