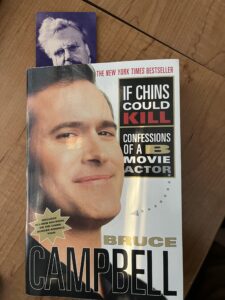 When you think about “unpopular culture” in the context of this blog, you probably think about “high culture.” Maybe so, but today we’re going low.

Bruce Campbell explains what his autobiography is all about on the back cover:

“… Bookstores are chock-full of household name actors and their high-stakes shenanigans. I don’t want to be a spoilsport, but we’ve all been down that road before.

“The truth is that though you might not have a clue who I am, there are countless working stiffs like me out there, grinding away every day at the wheel of fortune.

“If Chins Could Kill: Confessions of a B Movie Actor is my first book, and I invite you to ride with me through the choppy waters of blue-collar Hollywood.”

There you have it. If you know anything about Bruce Campbell, you know he has a quick wit and an affable attitude. Self-deprecating one minute and wryly critical the next, his anecdote-packed life story makes you chuckle with every sentence, and that’s barely an exaggeration. This is a guy who loves acting and everything about the technical and in-the-trenches aspects of making movies. Being friends with Sam Raimi (director of Spider-Man among many other things) got him off to a very early start. The cult classic The Evil Dead, which starred Campbell, premiered in 1981 when he was in his mid-20s. He and Raimi had already made a number of films by then, mostly in and around their home state of Michigan.  Campbell’s descriptions of these early productions are hilarious and full of fascinating details such as how dismembered limbs are filmed, how cameras are rigged when the budget is a hair over zero, and what is the best recipe for fake blood.

At one point Campbell finds himself walking the streets of Hollywood for the first time, disappointed and somewhat surprised by how seedy it is. Nevertheless, who does he run into but Charlton Heston, the man he rips on the back cover of his book! His encounter and further encounters with Heston are funny (Campbell was starstruck). Despite what Campbell says about Heston’s autobiography, I think the two men and their autobiographies have a lot in common. I should know, because I just finished reading Heston’s autobiography.

Campbell is a lot funnier than Heston, though, at least judging by their books.

Campbell is, or at least was for much of his career, highly underrated as an actor. He was magnificent in the Evil Dead films, especially Army of Darkness, which must have been more physically punishing than playing 10 NFL football games back-to-back. His portrayal of Elvis Presley in Bubba Ho-Tep should have won him an Oscar nomination. He turned Burn Notice from a run-of-the mill espionage series into a minor classic. And although he’s had numerous bit parts in big films, some of those parts, such as the Surgeon General of Beverly Hills in Escape from L.A., are classic performances in their own right.

The guy just makes any film or TV show better. And he’s got a big fan following to prove it, and not just Evil Dead fans. He’s got almost 700,000 followers on Twitter and close to 900,000 on Facebook. Not bad for a guy from Michigan who could barely scrape two nickels together for first couple decades of his career.

His anecdotes about not having any money are really funny, like the junker he impulsively bought for $150 that turned into a money pit,  and having to cold call Michigan dentists to find investors for one of his and Raimi’s film projects.

He takes the glamour out of acting and makes it interesting to people interested in the reality of filmmaking rather than the doctored-up facade.

In the feature photo, you’ll notice G. K. Chesterton’s face sticking out of the book (it’s my go-to bookmark). That’s because Bruce and G. K. have a few things in common, too. They both love common people, for example. They are both funny and are always ready, willing, and able to make fun of themselves. The two men also have range. Chesterton wrote fiction, poetry, and essays on just about any subject you can think of. Campbell has played villains, heroes, weirdos, and normal guys, convincingly every time. He’s acted, directed, produced, and (like Heston) filled gaps and smoothed things over on tense production sets.

Campbell is a lot easier to read than Chesterton, though, and I can’t wait to start the second installment of Campbell’s autobiography.

Army of Darkness: The BOOMSTICK

The Surgeon General of Beverly Hills!

Guest Starring on The X-Files

2 Replies to “Book Review: If Chins Could Kill: Confessions of a B Movie Actor, By Bruce Campbell”