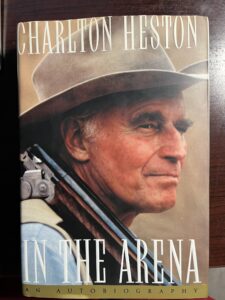 In the Arena, An Autobiography, by Charlton Heston, is not my normal read. It sparked my interest because three of Heston’s films,  The Ten Commandments, The Omega Man, and Soylent Green, are among my favorites and I was curious about the inside stories of their filming.

The book does not disappoint! Heston, writing himself with the help of a great memory (he held entire Shakespeare plays and more in his short- and long-term memory) and a lifetime of journal notes, covers all the important details of his upbringing, family life, and professional career. And it’s a lot of book: Heston himself describes it as being big enough to knock a big man down.

Although Heston was one of my favorite actors from the 60s and 70s, I never knew the range of his talent. He was a skilled Shakespearean actor who played several of The Bard’s most challenging roles on screen and on stage. In addition to acting, he directed, wrote screenplays, produced, and assisted direction on set in a variety of ways. Among his pals, collaborators, bosses, and influences were the greatest of the great, including Orson Welles, Laurence Olivier, Cecil B. DeMille, and William Wyler. He was also six-time president of SAG, involved in the early Civil Rights movement, entertained and visited troops in Viet Nam by choppering solo into forward positions (with a military escort), and served in diplomatic roles all over the world. He knew everybody who was anybody.

His observations and anecdotes about these famous people (as well as ones who should be famous, such as Yakima Canutt, who among many other things directed Ben-Hur’s famous chariot race scene) are fascinating — watching an older Gary Cooper walk out of a restaurant and stare down a young heckler, helping SAG president Ronald Reagan negotiate a tough contract, commiserating with Olivier after a Broadway flop, and much, much more. It’s important to note as a reflection of Heston’s character that he seldom has anything bad to say about anyone, and when he does, he keeps his criticism short and as respectful as possible.

Fascinating as all of this is, two things stands out to me in this autobiography: his accounts of the production of films and the importance of his family.

First, his production notes. If you’re interested in how films were made back in the days of big sets and non-digital special effects, this book is for you. For instance, Heston devotes 10 or 15 pages to the filming of the Ben-Hur chariot race, still considered one of the finest action scenes ever made. His descriptions of the sets; explanations of casting, pre-production, editing, camerawork, direction, acting, and other technical aspects of filmmaking; as well as his accounts of the personality conflicts on the set and behind it, give you a whole new appreciation of what you’re seeing when you watch one of his films (or any film, for that matter) on late-night TV.

As for family, that was Heston’s priority, without doubt. Lydia Clark, whom he met when they were theater students at Northwestern, married Heston in 1944. They remained devoted husband and wife until his death in 2008. Heston often brought Lydia, and their children, Fray and Holly, to live with him on his many extended overseas shoots. When shooting was closer to his California ranch, he’d often fly home to spend time with his family. He seems to have gotten far more joy from watching his children grow up than from any career accomplishment.

In terms of character, Heston had more of it in his little finger than I have in my entire body. He was a tireless worker. He would tackle just about any professional challenge thrown at him, and yet he never compromised on his professional and personal principles. He put his family first even when it was inconvenient for his career. He respected everyone he worked with from the producers down to his on-location drivers. He was a dynamic leader in the entertainment and political arenas, but he was also humble, freely admitting his physical and intellectual limitations and the superficial nature of many of his public relations activities. He didn’t really get into politics or his worldview until the last few pages of his massive autobiography — but what he wrote should be required reading. He was highly critical of political correctness and foresaw with chilling clarity how it would undermine the U.S. All his predictions, sadly, have come to pass. For now.

LEND HIM YOUR EARS

2 Replies to “Book Review: In the Arena, An Autobiography, by Charlton Heston”