Dale Ahlquist, The Story of the Family: G.K. Chesterton on the Only State That Creates And Loves Its Own Citizens 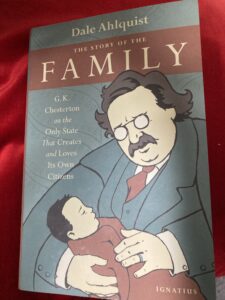 These cultural institutions are so commonplace that, with the exception of abortion, the vast majority of Americans accept them as simply the way things are.

But it was not always so. A mere century ago, all these institutions were new, controversial, and a complete departure from what had been normative for thousands of years.

The Story of the Family, a compilation of essays by G.K. Chesterton assembled by Dale Ahlquist, President of the Society of Gilbert Keith Chesterton, offers convincing arguments in defense of private eduction and full time motherhood, and in opposition to birth control, abortion, and divorce. Although Chesterton wrote a century ago, his analysis is if anything more relevant now than it was then.

There is a lot to be said for private education and against public education, and Chesterton says it eloquently.

There is a lot to be said for full-time mothers, and Chesterton says it eloquently.

There are grave dangers to individuals and society in divorce, birth control, and abortion, and Chesterton points them out with chilling clarity.

Chesterton, in all his writings, keeps his focus on common people, common sense, and normal behavior and attitudes. Today, culture is obsessed with the fringes. What is normal is under perpetual attack; what we are told is normal seems to change literally by the day. In fact, we are being led to believe that the traditional family, with a working father and full-time mother, is perhaps the only thing that is not normal.

If you do not see the grave danger in the destruction of the family, or are at a loss for how to defend it – read this book without delay.

There are too many brilliant insights in this book to share, but here are a few shorter ones I found particularly illuminating.

“The business done in the home is nothing less than the sharing of the bodies and souls of humanity. The family is the factory that manufactures mankind.”

“If children see that their teachers despise what their parents desire, there is and must be a conflict of authorities. And there is, and must be, in the modern State, a monstrous discovery; that it is the more new and unnatural authority that has the power.”

“The [school]master must at best teach morality mainly in theory; while the mother is obliged to teach it in practice.”

“…The obvious effect of frivolous divorce will be frivolous marriage.”