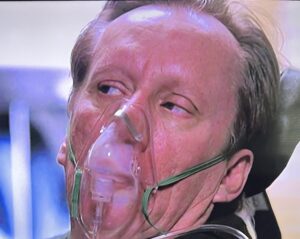 Recently I wrote about Time of Death, my favorite episode of ER.  A close second, which aired a little over a year later (February 2, 2006), is Body & Soul. Both episodes explore the coming of death: In Time of Death, it comes in the form of alcoholism; in Body & Soul, the reaper is one of the grimmest of the grim, ALS, or Lou Gehrig’s Disease.

(SPOILERS FOLLOW.) Body & Soul, directed by ER regular cast member Paul McCrane, stars James Woods as the brilliant Dr. Nate Lennox, a charismatic professor who, as we learn, motivated Abby Lockhart to stay the course and become not only a doctor, but a great doctor. The episode begins with Lennox coming into the ER near the end, and proceeds to tell his story through a series of flashbacks that depicts Lennox in various stages of the disease. It’s heartrending to see the transformation from dynamic teacher to someone barely able to move, to breathe, to communicate. Abby, played by Maura Tierney, looms large in the episode, refusing to let a battle-weary Lennox give up.

Time of Death and Body & Soul are similar in many ways. Each features a star actor and each story centers completely on him, ignoring the multiple subplots going on among the regular cast — although in Body & Soul, Lennox’s long-suffering assistant, Fran, played by Ally Walker, has an important story of her own and figures prominently in the plot. Each episode uses flashbacks to flesh out the story. And each episode has the guest star delivering a world-class performance. Ray Liotta won an Emmy for Time of Death; Woods received an Emmy nomination for Body & Soul.

Woods has always been one of my favorite actors. He has an element of  violence and  insanity simmering just below the surface and you never really know what he’s going to next in front of a camera. And yet he can be entirely sympathetic, as he is playing Lennox. The way Woods handles the physical portrayal of ALS from beginning to death’s door arouses extraordinary compassion and the same time, horror. As well it should: ALS is a terrifying disease. Fortunately there is enough hope in the story to make it not only watchable, but inspiring. TV drama at its finest.