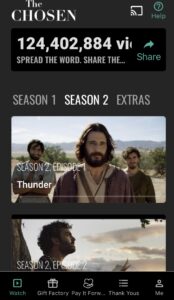 A reader of this blog recommended The Chosen several months ago.

The Chosen is a multi-season dramatic series about the life of Jesus Christ. It combines a faithful rendering of the Bible with creative but totally plausible backstories about the characters that make the events described in Scripture come alive and reach the depths of your soul. It’s more than entertainment. It’s life-changing.

I’m not the only one who likes The Chosen. In fact, it is the largest crowdfunded media project in history, having raised more than $20 million from tens of thousands of donors. The show’s Facebook page has more than 1.6 million followers. It’s been viewed by 50 million people in 180 countries and translated into more than 50 languages.

The creator of The Chosen, Dallas Jenkins, says he wants to bring out the human side of Jesus, rather than concentrate almost completely on His divinity, as is so often done in dramatic portrayals.

This is a great idea. For many, myself included, Christianity has a way of becoming an abstract set of moral commands that are just “there.” But how did these commands get here? What’s the point? Why would I want to be a Christian? How do I know these beliefs are true?

The Chosen answers these questions not by preaching or lecturing, but instead by showing us what it would have been like to physically encounter Jesus, how He transformed not only the minds and hearts of the Apostles and His other followers, but also their very souls. As we see these relationships play out, we begin to see how Jesus can do the same for us, 20 centuries later.

I’m doing a terrible job of expressing this, but I think if you watch the series, you will understand what I’m trying to say.

(By the way, for you Chicago-area folks, Jenkins is a local guy. His first film was shot on a farm in Marengo, and I think he still lives in the Western Suburbs.)

The cast is terrific. Jonathan Roumie, who plays Jesus, must have the Holy Spirit working within him on the set. He’s that good. Paras Patel, who plays Matthew, delivers a surprising interpretation of the character, and does it quite convincingly. All the performers are perfectly cast. And so many fresh faces! The only performer I recognized was Erick Avari, a reliable character actor you’ve seen a million times even if you don’t know his name. Avari plays Nicodemus and takes part in what Jenkins describes as the most important scene in the entire series.

The Chosen can be seen here.  There are also a variety of apps and other viewing options.  Jenkins produces a ton of promotional clips, cast interviews, and other behind-the-scenes videos that are all quite interesting. In particular, his hourlong interview with Roumie is at times nearly as emotionally powerful as the series itself.

I hope you will watch.

2 Replies to “Great Entertainment – The Chosen”