“I long lived in this state of lunacy, which, in fact if not in words, is particularly characteristic of us very liberal and learned people.” (Leo Tolstoy, A Confession) 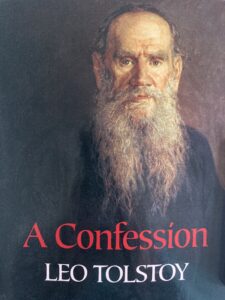 Quite an admission from this towering figure of philosophy and literature. Unlike most of us, Tolstoy had a willingness to change himself, putting his money where his mouth is, living up to his famous observation that “[e]veryone thinks of changing the world, but no one thinks of changing himself.”

We are clearly living in a time where the lunacy of elites has shifted into hyperdrive. When Tolstoy wrote A Confession, back in 1879, he faced a similar situation. Hypocrisy was rampant, war was waged in the name of peace, lofty morals were proclaimed while the actions of those who proclaimed them were evil, either by design or through a lack of perception.

In this slender but profound volume, Tolstoy describes his efforts throughout his life to make sense of a world that made no sense. After years of spiritual struggle, everything seemed hopeless to him and he contemplated suicide — but with characteristic frankness, he admits  he was just too chicken to carry it out. Eventually he came to realize it was more than  cowardice that prevented him from taking his own life; it was the intuitive knowledge that his rational analysis of the situation, so arduously, artfully, and brilliantly formulated, was somehow amiss and incomplete.

For Tolstoy, life is only worth living if it has meaning. But what is the meaning?

“… I returned to a belief in God, in moral perfection, and in a tradition transmitting the meaning of life. There was only this difference, that then all this was accepted unconsciously, while now I knew that without it I could not live.”

Throughout the essay, Tolstoy reflects that he had been perpetually outsmarting himself, writing off the common sense of common people as superstition and stupidity — when in fact, he came to realize, these common people knew instinctively what had taken him decades of mental torture to understand. He had made the mistake of regarding the whole world as if he and his circle of elites were the whole world.  And even when this mistake became apparent:

“I understood why I had so long wandered round so evident a truth, and that if one is to think and speak of the life of mankind, one must think and speak of that life, and not of the life of some of life’s parasites, That truth was always as true as that two and two are four, but I had not acknowledged it, because on admitting two and two to be four, I had also to admit that I was bad; and to feel myself to be good was for me more important and necessary than for two and two to be four. I came to love good people, hated myself and confessed the truth. Now all became clear to me.”

Tolstoy has several insightful comments about organized religion. He notes that church leaders and churchgoers in general lead lives that are no more moral (and often less moral) than non-believers. Furthermore, in his numerous discussions with leaders of many churches, he concludes that when push comes to shove, these leaders are motivated by worldly concerns far more than by a desire to understand and follow the will of God.

To live with lunacy, we must do as Tolstoy did. Get back to basics. Understand tradition, don’t dismiss it out of hand. Look inward. Look upward.

Peace be with you.

4 Replies to “Living with Lunacy”