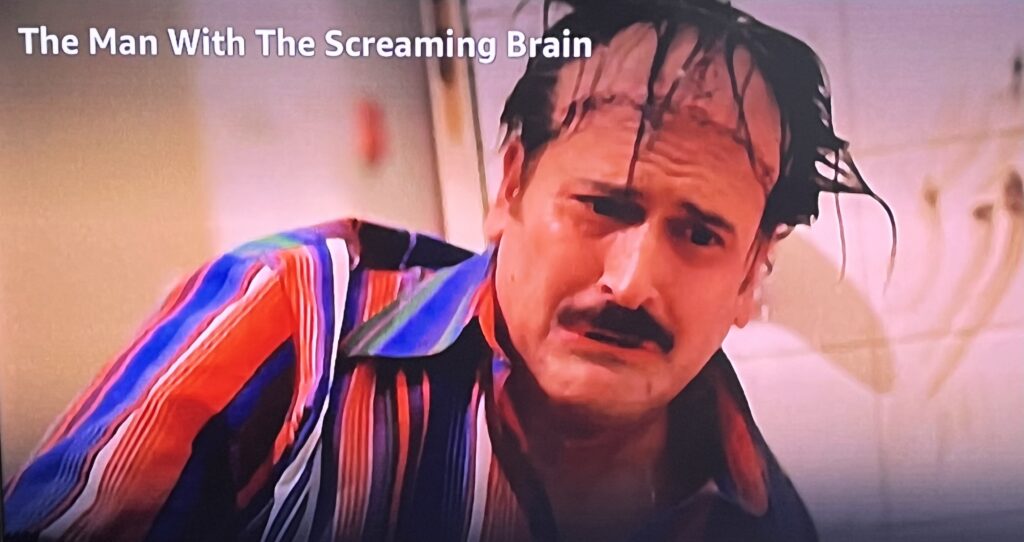 As I’m laughing my way through Bruce Cambell’s autobiographies, If Chins Could Kill and Hail to the Chin,     I find myself inexplicably fascinated with the actor’s 2005 film (and directorial debut) Man with the Screaming Brain.

Maybe it’s the title. I mean, how can you improve on that?

Perhaps it’s the blend of horror, science fiction, and slapstick.  Campbell is a big Three Stooges fan, along with his frequent collaborators the Raimi brothers. Ted Raimi is featured in Screaming Brain and was clearly inspired by Shemp Howard. Campbell manages to insert Stooges quality work here and there throughout the film, such as, for instance, here:

How can you not love this?

Screaming Brain was filmed in Sophia, Bulgaria to save money. The backstory, covered by Campbell in Hail to the Chin, includes a lot of struggling with the language barrier, improvised sets, and a major rewrite of the script to change the setting from L.A. to Bulgaria. It’s amazing that the film is as good as it is considering the production challenges and the lack of budget.

The plot is actually quite strong, with plenty of dramatic tension to go along with the silliness. Campbell is just the actor to carry it off, with his uncanny ability to seem perfectly normal and matter-of-fact no matter how crazy the situation. The supporting cast is just good enough to get by — with the exception of Stacy Keach, who is solid as the mad scientist. (I was surprised that Campbell’s backstory doesn’t talk about Keach or how he came to be in the film.)

The movie bombed when it was released. Maybe with Campbell’s growing popularity since then it has fared better. For me Man with the Screaming Brain is the top of the bottom, a terrific B-movie that’s unapologetically silly, fast-paced, coherent, offbeat in the extreme, and yet beneath it all, a love story worthy of the Hallmark Channel — a network Campbell has been doing some work for recently, believe it or not.